Why is it so “bad” to be vulnerable? Men’s struggle for emotional equality 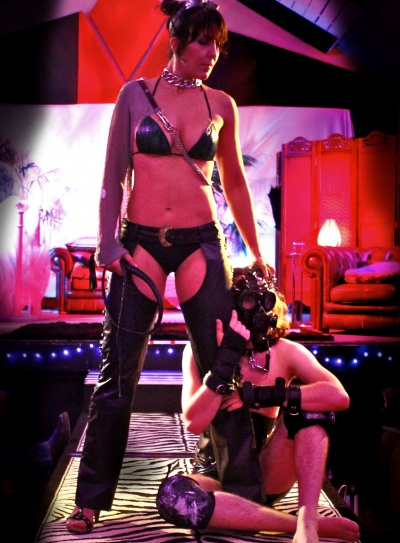 In the last 100 years, women have taken gigantic steps towards gender equality. But this time, I won't be discussing the feminist agenda. I want to approach a much less debated subject: men’s rights. As women have fought to become equal, they have taken many traditionally "masculine" qualities such as strength, competitiveness and confidence. Many of these masculine qualities are often seen as positive and well desired attributes within personal development. While women have expanded their range of personality and opportunity, men have, in general, maintained their stronghold on the male sphere (typically public endeavors, as business, work and leadership). Yet, while there are more males becoming stay-at-home dads and taking traditionally female occupations, in general, it is not well accepted for men to express typical “female” qualities. This creates an unfair imbalance; women can express male or female qualities, but when men express “female” qualities they are often criticized and told to “man-up” or “grow some balls”. Society expects men to show NO signs of weakness, especially at the public sphere (work), where many men navigate to when things get tough. This attitude is also gender discrimination; it is time for men to fight for their rights to express all forms of human expression, not just the “manly” ones.

Even in our supposedly progressive western society, the connotations of many "feminine" qualities, such as vulnerability, emotionality and shyness veer toward the negative side. As a simple exercise, look over the two lists below imagining it describes a man or a woman. Though not all words in list 1 are inherently negative in social meaning, most of them take a more negative meaning when applied to a man. For example, a sensitive woman is more socially acceptable than a sensitive man. When men exhibit these qualities, they are frowned upon. On the other hand, women exhibiting qualities from list 2 might be criticized for some of them (a tough-skinned/resilient woman can easily be dobbed as harsh and insensitive), but for the most part “male” qualities are admired in both genders.

Why are masculine qualities often perceived as positive and the reverse trend with female qualities? I could get into the feminist blame-game where the “male-oppressor” is responsible for vilifying traditionally female strengths, but there are many factors at work. Gender differences exist due to our evolution and history, and they survived in this way as part of the specialization of the two genders, which was helpful for survival in harsh environments. At the same time, there is also a huge range of variety between the two stereotypical male/female ends of the scale. So why is there so much thinking in absolutes within the gender dichotomy? These tendencies may be hard to change, but we can change the value system we use to describe them. So the key question is not “why are female qualities seen as more negative”, but “do we need to have a good vs. bad dichotomy for characteristics that serve different purposes?”

Why are masculine qualities often perceived as positive and the reverse trend with female qualities? I could get into the feminist blame-game where the “male-oppressor” is responsible for vilifying traditionally female strengths, but there are many factors at work. Gender differences exist due to our evolution and history, and they survived in this way as part of the specialization of the two genders, which was helpful for survival in harsh environments. At the same time, there is also a huge range of variety between the two stereotypical male/female ends of the scale. So why is there so much thinking in absolutes within the gender dichotomy? These tendencies may be hard to change, but we can change the value system we use to describe them. So the key question is not “why are female qualities seen as more negative”, but “do we need to have a good vs. bad dichotomy for characteristics that serve different purposes?”   Traditionally, a woman’s domain was the private/family sphere, which required specific set of characteristics. For instance, it’s more important to be sensitive and intuitive when looking after children than when negotiating a business deal. So rather than label characteristics as good or bad we should look at the context and situation. For instance, a woman (or a man, for that matter) may be rational and independent within her work and social spheres (masculine/yang expression), but she may remain sensitive and nurturing in her intimate/family life (feminine/yin expression). Many of the traditionally female qualities are important when dealing with the “right brain” issues, such as emotions, relationships, art and recreation. Vulnerability and sensitivity are vital parts of developing intimate relationships. If one does not open up one’s heart, trust is hard to build. As T.Q. from www.singleblackmale.org describes: “Most of the women I know like for their men to NOT be vulnerable by default (to the general public so to speak), but to gradually open up and be vulnerable to them personally after he comes to trust her.”   Men have emotions too, even if they may not be willing to admit it. But where women have built a culture where emotional expression is supported, men are missing out. For so many men, life is all work and no play. This needs to change.

As a professional dominatrix, I frequently witness men in search of emotional support and craving to express their more gentle side. I'm sure, like many women, men feel vulnerable at least once in a while. They may not show it publicly, but they are also victims of stress, betrayal, distrust, heartbreak, guilt and disappointment. Only, for a vast majority of them, crying on a friend's shoulder is not an option. So how can they express and clear these negative feelings? Many men use anger and physical exertion to express their feelings. They might also sublimate them through art or visit a psychologist. But a large majority is more likely to bury these feelings (as the Australian saying goes “harden the fuck up, mate!”), a road that can easily lead to stress-related illnesses, or in a worst case scenario, suicide. In fact, it’s no wonder that in general, suicide rates among men are so much higher than among women. Men do not have a culturally accepted outlet for sharing emotions, especially when these feelings do not fit the accepted masculine stereotypes. That’s where kink comes to the rescue .

[i] Check this study on female leadership for an example of this type of double standard: http://www.catalyst.org/uploads/the_double_bind_for_women_in_leadership_flyer.pdf

[iv] Check Roy Baumeister for his theory of SM as an escape from the burdens of the Self. http://www.niu.edu/user/tj0bjs1/bdsm/Baumeister%20(1997).pdf 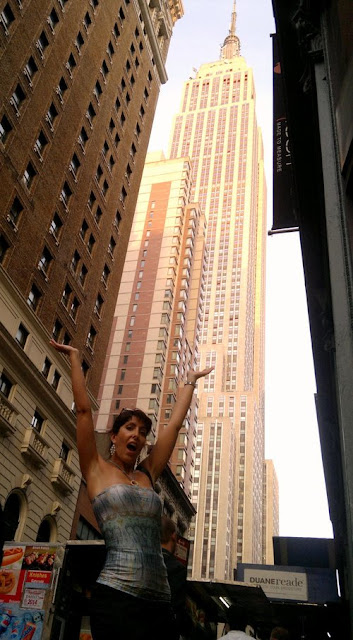 We started at Purple Passion, where I bought my first steel boned corset over a decade ago. What a delightful shop with latex, leather, spandex, shiny mesh, in countless styles, shapes and sizes. So many toys, hoods, masks, corsets, and shoes! I lost three hours there and came out with a soft leather flogger for those sensitive body parts, new vampire gloves to replace my good ol' faithfuls, a cute silicone "doggie bone" gag, two jock straps for my pet and a cyber waist coat style top.

While walking to our 2nd stop in the West Village, we came across a little leather shop tucked in a basement flat on Christopher Street - London Leather. They have lots of leather and PVC fetish clothes, corsets, collars and impact toys, but no latex. It’s worth a look as it had decent prices and a good range. No actual website, but quite a bit of stock to check out…

Across the road is another favourite: The Leather Man. Don't be discouraged by the name. Although it is primarily a menswear shop, they also cater for ladies. I saw a fantastic leather cincher for only $180 but unfortunately, it wasn't my size. We ended up grabbing a box of black latex-free nitrile gloves, a silicon tube attachment for my Hitachi wand (for forced orgasm training), a small red "hand-shaped" riding crop and some gorgeous army green leather pants. They even hemmed the pants to the correct length for my pet. Great service with a smile! By the way, both The Leather Man and Purple Passion offer a 10% discount for professional dommes. So be sure to bring your business card!

Coming back to West 4th st, we attacked three neighboring shops: Tic Tac Toe (#161), Burlesque (#163? Can’t find it online, but they are all next door to each other) and Pink Pussycat (#167). They all had similar style gear. Lip service costumes, pantihose and stockings, lingerie and of course, shoes! I got some frilly undies, fake eyelashes and black and gold steampunk stillettos for a steal! 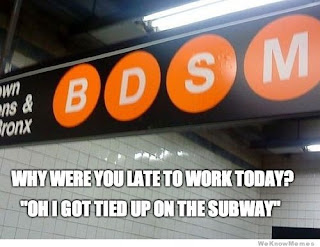 On day two, we visited the East Village, to check out the Baroness exclusive boutique. So much shiny, I was cross eyed with all her delightful designs. I grabbed some items for my pet and a black mini skirt to replace the one that ripped in Montreal Fetish Week.

The Baroness Latex Boutique, 530b East 13th Street (between Ave A & B)

Of course we needed to make a stop at Gothic Renaissance; a feast of velvet coats, Victorian corsets galore, shoes & boots for ladies and gents, AMF molded leather corsets, plenty of custom made accessories and a multitude of styles from Vampiric to Steam Punk. You’ll need at least 2 hours to look through it all…

And around the corner, another gem from my Princeton days: Halloween Adventure. This is more focused on the Halloween style dress ups but you’ll still find a wide range of accessories, like the cute miniature top hats and steam punk goggles I got during this visit… A word of warning, some USA fetish parties discourage the use of pre-packaged Halloween costumes as “fetish wear”. So choose wisely.

For loads of shoes, including Doc Martin boots, and an interesting array of rockabilly, rock, punk, and goth attire, check another NYC must visit:

Further south, we visited the Orchard Corset Center which was a delight to visit! If you don’t have a corset yet, this is the place to go. They will measure you and give you advice for which styles suit your body shape best. Their prices were also quite competitive! 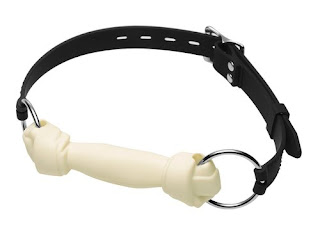 Wow! Two days and a total of 13 hours of shopping can be exhausting! So I opted for tapas dinner and a cab back to the apartment with so many bags that my pet could barely handle them all...

PS: Use my Google Map to follow the same circuit on your next visit to the Big Apple!

Article originally published on iFet.com (November 2014) and at:http://www.KalyssMercury.com
at August 09, 2017 No comments: